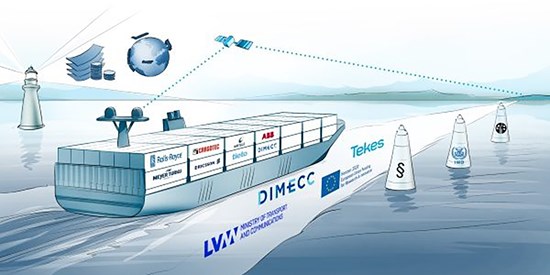 Top players from marine and IT-industry have teamed up to jointly develop world’s first system of autonomous ships. The shared vision for the ecosystem partners is to enable fully remote controlled vessels in the Baltic Sea in three years and to achieve autonomous commercial maritime traffic by 2025.

The One Sea ecosystem, founded in 2016, represents exceptionally advanced co-creation where global leaders in their industries work to reach their joint goal of autonomous traffic. The founding partners in the One Sea – Autonomous Maritime Ecosystem are ABB, Cargotec (MacGregor and Kalmar), Ericsson, Meyer Turku, Rolls-Royce, Tieto and Wärtsilä. The association of Finnish Marine Industries supports the work, and the Finnish funding agency Tekes has invested in the ecosystem. The leader of One Sea is DIMECC.

“Our One Sea ecosystem is the natural next step in the digital transformation of the marine industry. Several new business initiatives in the autonomous maritime traffic have already been started and can be expected in the future. The companies and organisations collaborating in One Sea are forerunners in their respective fields and the fact that our ecosystem is industry-driven separates it from many of the more or less academic exercises. One Sea ensures a well-researched, tested and highly capable autonomous shipping network”, comments Harri Kulmala CEO of DIMECC.

The effort to create products and develop software and solutions to enable autonomous traffic has already been started in the participating companies. In order to promote autonomous traffic around the globe, the One Sea – Autonomous Maritime Ecosystem has taken upon itself to introduce roadmaps towards an autonomous maritime future. The roadmaps include a timeline towards 2025 and major themes to be investigated and levels of maritime autonomy – all minimising accidents, decreasing the environmental footprint of marine traffic, and advancing possibilities for efficiency improvement and new commercial ventures. The roadmaps have been created by the representatives of the companies included in the ecosystem and verified by a national Advisory board as well as an International Advisory Board.

The expected timeline for autonomous maritime traffic shows that the regulators will have to increase the pace at which new regulations are approved. The technologies are advancing at such a speed that the rules and regulations risk becoming obsolete. Fortunately, forward thinking national and international units are doing their best to enable autonomous traffic even within such a short timeline.

In addition, One Sea – Autonomous Maritime Ecosystem is currently working on the roadmaps around themes as Operational, Technical, Security, Regulatory, Traffic Control and Ethical. Roadmaps for these important themes will be introduced to the public and other maritime actors in due course. There is ongoing research and discussions with related parties regarding each of the themes and jointly they will enable commercial autonomous maritime traffic by 2025.