Finland’s new premium scheme for renewable energy comprises of a competitive auction process under which the first premium system based, technology-neutral tender process was launched at the end of year 2018. The support scheme is a combination of a sliding and fixed premium and applies to wind power, solar power, wave power, biogas and wood fuel power. The aggregate annual electricity production covered by the scheme is 1.4 TWh. Successful projects, expected to be dominated by wind generators, receive support for 12 years.

Increasingly attractive market conditions for wind power development in Finland have produced the first purely market-based projects that do not receive any state subsidies. According to Finnish company TuuliWatti, its Viinamäki wind park project in North-Western Finland, consisting of five 4.2 MW wind turbines, is the first market-based investment of this magnitude in the Nordic countries. In addition, other market projects have been announced by international investors. These include CPC, Neoen and WPD Finland, which are benefiting of a PPA signed with Google, Energiequelle project and OX2 in collaboration with IKEA. The projects by OX2 are together the largest subsidy-free wind power construction in the Nordics with a total of 25 wind turbines and a combined capacity of 107.4 MW.

Current projects in various stages of development include close to 13 000 MW on-shore and some 2 700 MW off-shore projects. The vast majority of the developed projects are in the EIA, planning or permit phase. Today, there are close to 200 companies and other organizations actively operating in the Finnish wind power market. The largest investors to date have been domestic companies EPV Group, Tuuliwatti and Suomen Hyötytuuli.

Want to invest in Finland?

The Finnish business environment nurtures the wind power boom. Finland has one of the most stable grids in the world and a steady stream of investments serves to strengthen the grid capacity. It’s also a safe currency bet for Euro investors as Finland is the only Nordic country in the Euro zone. 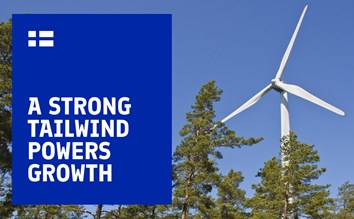