There are thousands of lakes in Finland, and Finland has thousands of examples of world class innovation, ranging from high tech solutions to everyday inventions.

Our society has become an ideal business environment where everything works: from basic infrastructure to high ethical standards. Investments in education and an open, equal society have made Finns independent and creative problem solvers who can boost productivity with new exciting new ideas.

Finns like to make sensible use of their time. They follow timetables and other plans faithfully and expect the same from others. They expect well-defined targets and processes, while taking authority and responsibilities seriously. Finns are careful and gather background information in advance, but they make decisions quickly once they have the necessary facts.

Regardless of their position in the company, many people are on a first-name basis. Finnish companies generally have a flat organizational structure and informal work relationships are commonplace. A healthy sense of humor is also an asset, and if you have the opportunity to take a sauna, try it out, your Finnish hosts will be very impressed.

The best way to experience Finnish culture is to become a part of it. In Finland, you won't just stand and watch – you're invited to join in. Come say hi and find your inner Finn!

Finland is among the largest countries in Europe. With its 5.5 million people, however, it is the most sparsely populated country in the European Union. Its population is concentrated in the southern parts of the country and in a few cities.

Around 75% of its area is covered by forests, and nearly 10% is covered by lakes and rivers. Bogs are typical in Finland as well, ranging from swamps to wetlands. Peat from bogs generates around 5% of the energy used in Finland.

Finns like to call their forests Green Gold because they are its most important natural resource and the forest industry has been a major contributor to well-being in Finland. Other resources include peat, fresh water resources and minerals, for example iron ore, copper, lead, zinc, chromite, nickel, cobalt, gold, silver, phosphate, limestone, talc, quartz and uranium.

Finland's climate has four distinct seasons. The summers are usually fairly warm with temperatures rising above +20 degrees Celsius. In Lapland, the sun does not set during the summer months. Finnish winters can be cold and temperatures below –20 degrees are not uncommon. The mean temperature in Helsinki in July is +17 degrees and –5.7 degrees in February.

One of the great concepts in Finland is called "Everyman's Rights". This gives you the right to walk, ski or cycle freely where you want without permission from landowners (except very near people's homes, or in fields and plantations which could easily be damaged). You can also camp out temporarily. You can pick wild berries, mushrooms and flowers, fish with a rod and line, use boats, swim or bathe in inland waters and the sea, and walk, ski, or drive a motor vehicle or fish on frozen lakes, rivers and the sea. The concept has evolved over time and started out as an unwritten code created by a sparse population living in a vast, densely forested country.

Recycling rates are high in Finland

Finnish recycling figures are particularly good when it comes to returnable bottles and cans through the nationwide deposit system. The return rate for refillable glass bottles is almost 100 %. For recyclable aluminium beverage cans and plastic bottles, recovery rates are around 95 %. Finland also leads the way in paper recycling with a recycling rate of 81 % in 2014, which is very high by European standards with average of 60 %. This is largely because Finland has a well-established paper industry that is able to use the recovered paper. Used paper has been collected in Finland for almost a century, while in many other countries this is still a new idea.

Apartment blocks and housing cooperatives have their own shared collection points for paper, organic waste, cardboard and cartons, making recycling easy. Supermarkets and shopping centres also have collection points for metals and glass. Used electronic devices, batteries and lamps can be returned to the shops that sell those products. 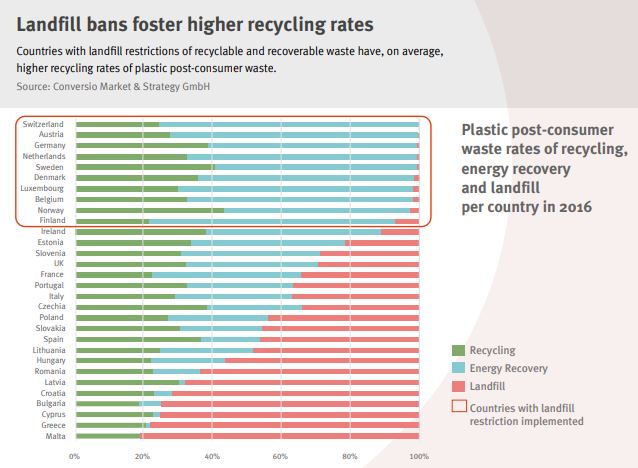