The competitive situation is tight with regard to occupational welfare services. There is an oversupply of services for both mind and body. Finnmotion, which is based on Method Putkisto, is differentiated by its continuous process and measurability. Business Finland is funding the productization and internationalization of the service.
Wellbeing and Health International markets SME 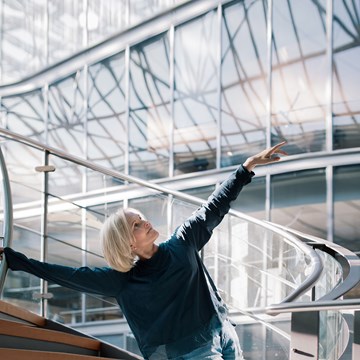 Finnmotion is an occupational wellbeing service developed from Method Putkisto, which combines physical and psychological ergonomics with a company's management strategy. As well as being a service for improving occupational wellbeing, the program provides a new perspective on improving a company's productivity. The service also responds to the challenges posed by poor working postures due to the digital era. The results are measurable in terms of reduced back pain or fewer absences, for example.

"The new factors are the progression, content and the fact that the process is led from the front by the management, while serving as a strategic management tool. It is created in harmony with the wellbeing and productivity of the company. The program is implemented during working hours, but is constructed in such a way that it 'creates space' within working hours rather than taking time," says Marja Putkisto.

"I have long been wondering what I could do to brighten up the blind, grey area in terms of wellbeing at work. It is difficult to distinguish the simultaneous effects of multiple factors – I wanted to convert them into a verifiable and measurable form. This is why I am launching the new concept of 'posture erosion', for example, which covers mental as well as physical erosion."

"Using this method, the employee has a better posture at the end than at the beginning of the day. The same is true in the long run – over the years, the posture in the workplace improves. The program tackles the core causes of pain and burnout. Another new feature is its continuity. It is not a gimmick or cure-all solution, but a physical and emotional self-care system."

The challenge is how to integrate various elements into a single effective organization in the midst of change – and by the simplest means. The need for change is acknowledged, but it requires courage to genuinely step out in a new direction. Trafi, the Finnish Transport Safety Agency, wanted to try out Finnmotion's ideas.

"Trafi's guiding principle is that we are actively experimenting with new practices in the maintenance of occupational wellbeing and other activities. Finnovation's process for correcting postures has been an interesting experience and the participants will hopefully continue to benefit from its teachings, such as the role played by the physique during change," says Olli Lindroos, Director General of Means of Transport at Trafi.