Trimble is gaining a foothold in Myanmar 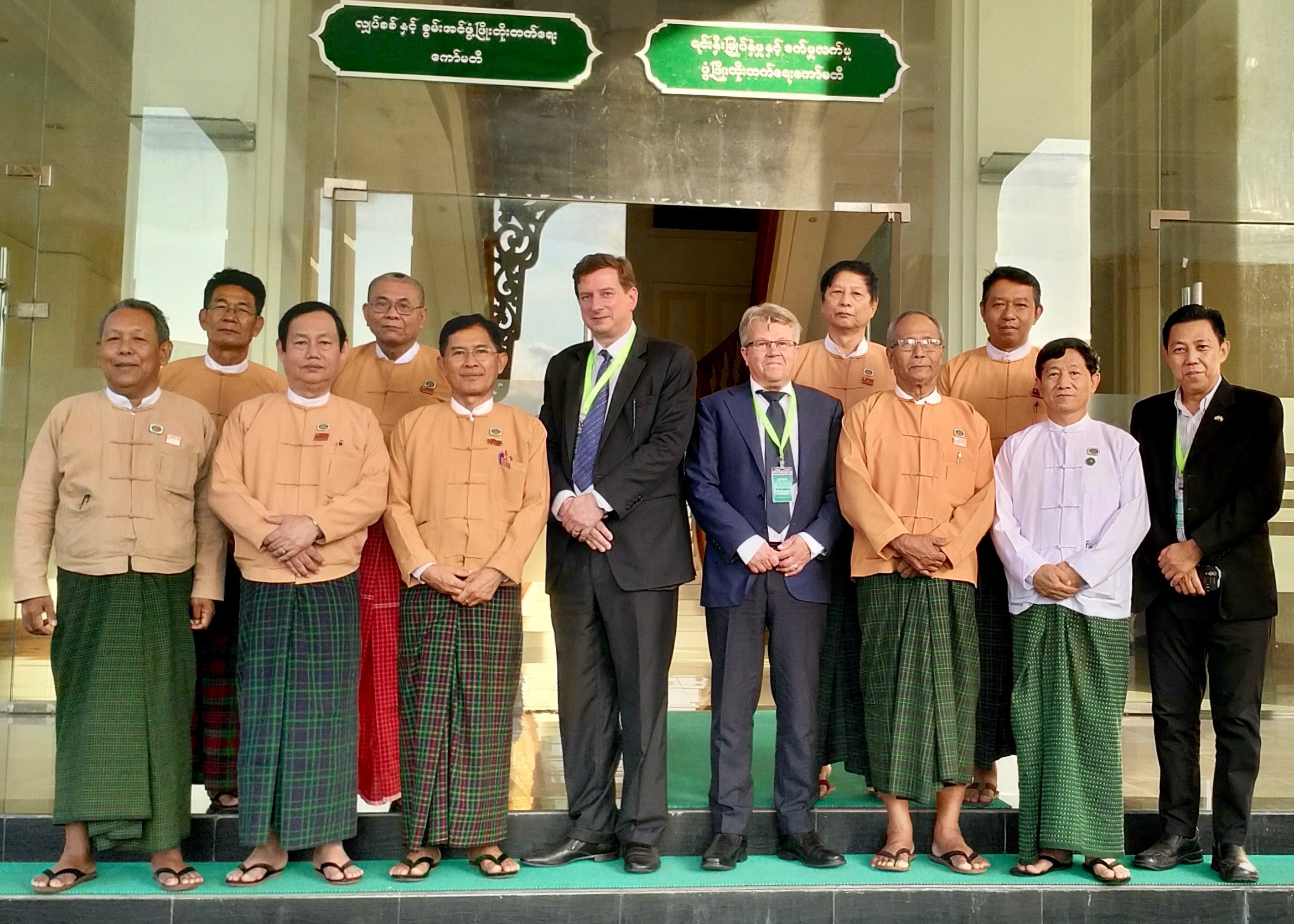 Kai Tuorila and Pekka Hämäläinen had a discussion with the Electricity and Energy Development Committee in June.

In one afternoon of May, the sky darkens, and the heavy rain whips out the streets of Yangon. The dry season is turning into the rainy season, and, at this point of the year, the country's fresh water reserves need replenishment.

In Myanmar, 70% of the energy is produced by hydropower, and the drought is manifested by electrical outages in everyday life of Yangonians. In the event of a power outage, the generators start running, filling the city's soundscape. They are necessary for commercial, industrial, as well as residential buildings.

There is a massive shortage of electricity in Myanmar. The national power grid covers only 40% of the 58 million population. The goal is to extend the network to the whole country by 2030. The golden Shwedagon Pagoda shines bright even though the sky has darkened. The pagoda is the landmark of Yangon, the largest city and business hub in Myanmar.

Tools for the systematic development of the power grid

New power plants are being built in Myanmar at a fast pace. "However, the delivery of the electricity efficiently to the end users is often forgotten," Pekka Hämäläinen describes the situation. He is the Regional Director for the Asia Pacific of Trimble Energy & Public Administration.

"More than a fifth of the electricity that is fed into the grid disappears before it reaches the customers."
According to Hämäläinen, in Myanmar, it is mostly the case of technical loss owing to the poor quality of the grid. "We are also talking about commercial loss, which means someone stealing electricity. In some Asian countries, this has been developed as a business," Hämäläinen makes a joke.

Trimble provides software solutions for energy distribution, which enables customers to manage the grid and, for example, to track where the wastage that occurs and, based on the data, plan on how to improve the quality of the network. "So far, it has been made pretty much by guessing." Trimble has customers in 130 countries and subsidiaries in 30 countries.

In Myanmar, the state plays a significant role in business

The markets of Myanmar and other emerging Southeast Asian countries are different from those of Europe or the USA. "There are more than 900 energy companies in Germany. In Myanmar, the sector is centralized. In that sense, finding a customer is easy, but everything else, in many ways, is challenging," Hämäläinen describes.

Myanmar is an extreme example of state-run businesses where the cooperation starts from the ministerial level. "If we are talking about an investment of fewer than 30 megawatts in the off-grid area, it is under the state ministries' administration. In other cases, the discussion starts from the union government," says Business Finland's commercial representative, Kai Tuorila.

Tuorila, who has been operating in Southeast Asia for over 30 years, expresses the business culture of Myanmar aptly. "In this area, it is not just know-how, but also know-who." As the largest city and business hub, Yangon uses half of Myanmar's electricity output. Two-thirds of the country is still off-grid.

Myanmar's economy and infrastructure declined during 50 years of military rule. After it started the transformation into a civilian government in 2011, foreign investments began to flood into the country, and it began to integrate into the global economy. "Therefore, when Finnish companies and Business Finland representatives discuss with the ministers, our role is to be more like experts, and together, we find out what kind of solutions we have to offer for the development challenges."

The lack of know-how in Myanmar has related also to the difficulty of finding local partners.
"Finding people with skills in electrical engineering and information technology, along with English skills, is extremely difficult," Hämäläinen says. In practice, Trimble trains the key people in its partner company. "I would say that finding a partner is more important than finding a customer."

One headache in one of the poorest countries of the world is the lack of money. "For example, neighboring countries like Thailand and Indonesia have resources of their own, but in Myanmar, the financial instruments are essential. Therefore, the role of the Finnish government is important."

Business Finland organizes a delegation visit to Myanmar 30.9.-4.10. and all the Finnish energy and bioeconomy companies are able to join.