Just attach the transducers and turn the cleaning power ultrasound on! 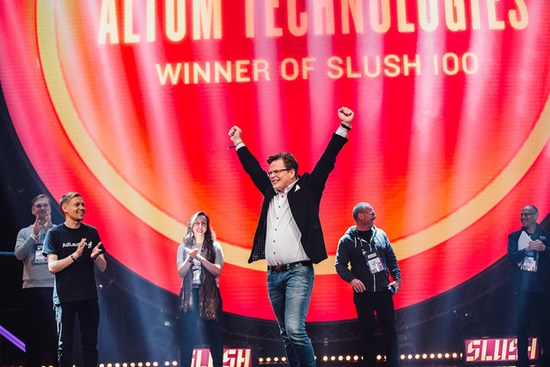 One of the founders of Altum, Bo Malmberg celebrates the victory! / photo: Petri Anttila
Bioeconomy and cleantech

"We took part in the Slush 100 competition and won the whole race after four different pitching rounds. This achievement gave us a huge amount of visibility," says Matias Tainela, CEO of the company.

In addition to winning, another thing that delighted Tainela was the Finnish start-up world's great drive of doing things together. Other new enterprises at the beginning of their paths showered the winners with congratulations and sincere praise for the fact that a Finnish company had won the competition after a lengthy while. Business Finland also follows Altum's success with satisfaction.

"It's great that Altum Technologies won the competition as a Finnish cleantech company. Crystallising and presenting the benefits of one's own solution is a skill that companies should invest in. By providing free training, we help companies in this respect as well," Outi Suomi, CleanWeb Program Manager, points out.

Altum has got off to a brisk start. After a few years of contemplation, the founders of Altum Matias Tainela and Bo Malmberg, who started the business with importing ultrasound equipment in 2012, began to develop power ultrasound technology in cooperation with Edward Haeggström, Professor of the Department of Physics at the University of Helsinki, and the top researchers of his team. The first small-scale series of test products was manufactured in 2016. In 2017, 15 different customer tests were performed, after which the first domestic customers began to use the device produced by Altum for their cleaning needs on a regular basis.

"We have done a lot of cooperation with the food, energy and pulp industries. In Finland, our customers include such companies as Stora Enso, Suomen Sokeri and Vapo," Tainela adds.

Vapo, for example, uses ultrasound equipment for the cleaning of its district heating networks. Small oxidised elements and small particles come off of pipelines, and they may block heat exchangers and prevent flow in production plants. In heat exchangers, the hot and cold meet, which provided a favourable place for fouling.

Due to blocked heat exchangers, the Finnish industry is estimated to lose approximately EUR 500 million every year. Power ultrasound cleaning combines the benefits of energy efficiency and cost efficiency, and eliminates the losses caused by the blockages.

In the method developed by Altum, the power ultrasound is controlled with a central unit, which receives the control signal from a computer. The most important part of the solution is the software that controls the power ultrasound. The smart device first identifies the pressure and flow levels, and the temperature differences in the heat exchanger. Then it optimises the ultrasound to a suitable level in accordance with the specific cleaning need. The company has filed a few patent applications for its solution. In product development, the starting point is providing a modular product that allows the customer to purchase as much power as he needs. At Altum, we talk about channels: one ultrasound transducer corresponds to one channel.

Towards the export markets

In 2018, the company aims at internationalisation, targeting the export markets in Europe, the United States, Australia and China.

"The focus of our operations is in Europe, because, due to its proximity, it is the easiest market to serve for us. However, we receive a lot of enquiries from individual companies from different parts of the world. The important sectors include the pulp, energy and chemical industries. Our new area of operation is water treatment," Tainela notes.

In the process industry, there are parts getting soiled in the process that can, at worst, stop the whole production. The externally fitted product solution by Altum is an excellent choice for such applications. Even though Altum's main target area is Europe, interested parties from North America − both the United States and Canada − have also been in contact. According to Tainela, the trip to the United States organised by Tekes in January last year was very good. It opened our eyes in respect of how things work in the U.S. Tainela considers the coaching and assistance provided by Tekes worth their weight in gold in other respects as well.

"We just recently closed our first international deal. The target country is Sweden, but that is all I can reveal at this stage."

The company also recently achieved good results in its research and testing for the neutralisation of waste by using a natural method, where also power ultrasound is involved. The aim is to process waste in such a way that it can be used as fertiliser on the fields instead of taking it to a landfill. A similar solution is also suited for the remediation of contaminated soil. Power ultrasound does not remove toxins from soil, but it is an effective way of eliminating bacteria and living organisms.