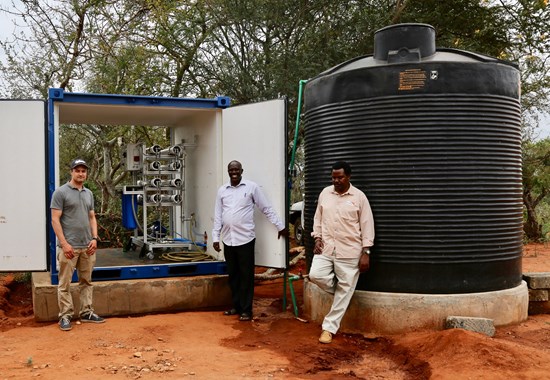 Finnish water technology company Solar Water Solutions has invented the most sustainable water purification technology in the world and wants to bring it to the people in developing countries.

Last January, Business Finland reported that the company's SolarRO unit was on the way to Kenya. The solar-powered unit was installed during this summer in a village school in Tseikuru, an impoverished rural area in Kenya. The unit produces safe drinking water for 700 villagers, 400 of whom are school children.

Forty percent of the Kenyan population has a lack of safe drinking water. For water resources, they use contaminated water from boreholes or stagnant water from ponds. Mainly, the problem exists in the rural areas and the slums of big cities.

SolarRO system is based on the reverse osmosis method, and it produces drinking water from any water resource without chemicals.

"Worldwide our technology is unique because it can use the solar energy directly without expensive batteries", CEO Antti Pohjola says.

Water technology is a new thing for Kenyan villagers

Technical specialist Toni Korttila was involved in the installation project in Tseikuru village, where the problem is salinated groundwater.

Despite careful planning, Korttila faced many challenges on the site.

"Installation was implemented as planned, but the circumstances surprised me. For example, the road to the destination was terrible because of the rainy season. I had to bring all my tools with me because such tools were not available in the local hardware stores", Korttila describes.

Korttila thinks that the expertise of local partners is vital in these kinds of circumstances: "Our partner, Epicenter Africa, drilled the borehole and installed the solar panels, pipes, and tanks very professionally."

The villagers welcomed the unit with great gratitude; however, they didn't have previous experience of water purification, and it took time to build up their confidence.

"I tried to get them to understand how the device works in practice."

In the beginning, the villagers got drinking water free of charge, but later, they bought it from the water kiosk. The village and regional government will determine the price of the water.

The Tseikuru project was implemented with World Vision. After good experiences, the company continues to enter the markets in Kenya and its neighboring country, Tanzania.

"There are large markets for water technology in Kenya, but the consumer price needs to be cheap enough so that low-income families can afford to buy it. Otherwise, the wanted development impacts will not be realized”, Pohjola says.

"Even if we can bring down the price of the water as low as a dollar per cubic meter, the investment is huge for Kenyans. Therefore, developing financial instruments is important to get into the markets."

The company has got support from the BEAM program, which is a joint initiative of Business Finland and The Ministry for Foreign Affairs, to develop a service concept where drinking water is produced locally and cost-effectively and sold to consumers at an affordable price.

The company, established in 2015, is at the same time preparing a market entry to Indonesia in Southeast Asia. The technology is at its best when desalinating seawater.

"When drinking water is converted from seawater reverse osmosis method uses much energy which produced with diesel or grid is expensive. With the solar power, the running costs are close to zero, and there are no emissions", Pohjola emphasizes.

In Indonesia, there are some 17,000 islands where seawater can be converted with solar power into drinking water very cost-efficiently.

"Indonesia with a population of 260 million is one of the biggest water markets in the world." 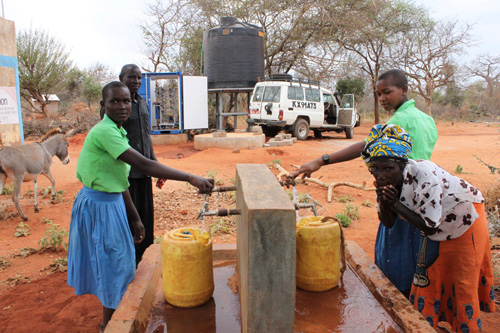 Villagers in Tseikuru no longer have to carry drinking water behind long journeys. SolarRO unit can produce as much as 1500 liters per hour.