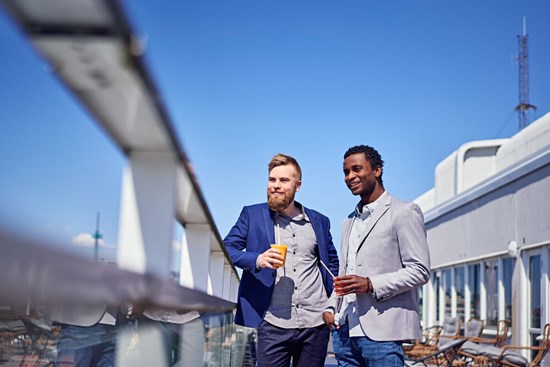 Living up to its billing as “Innovation Nation”, the Finnish welfare model is turning safety nets into trampolines.

For the fifth year in a row, Finland ranks as the happiest country in the world in the UN World Happiness Report. What do Finns know that the rest of the world doesn’t? And what does the answer have to do with…innovation?

Finland is sometimes seen as the gold standard for innovation, with Harvard Professor John Kao going as far as using Finland as the blueprint for his Innovation Nation book. Other top thinkers, from Richard "Creative Class" Florida to Simon "Nation Branding" Anholt have been quick to give Finland its props: innovation is deep in the DNA of the people.

Even Bloomberg Innovation Index 2021 gives a nod to the Finns, placing the country at the number seven. Bloomberg comments that Finland is "a jack of all trades", ranking between 10th and 17th in the world in all seven innovation related metrics. According to the Index makers, the country excels in technology and high-tech solutions, mentioning Linux operating system and text messaging as examples.

One person who certainly has a courtside seat to Finnish innovation is Ilkka Paananen, CEO of Supercell, the maker of some of the most creative and beloved digital games in the world. He sees a whole range of factors which contribute to Finland's success on the happiness front – thus boosting also creativity and innovation.

Actually, many findings of the World Happiness Report mirror observations made by Paananen: whether it's life expectancy and confidence in government or social support, generosity and freedom to make life decisions, the core "happiness infrastructure" is in fine form in Finland. "In most regards, Finland is amazingly well organised," Paajanen marvels.

Naomi Holopainen and Wanda Holopainen run Ataá Agency which focuses on diversity, equity and inclusion. The twin sisters feel that the Finnish welfare state is the foundation for, well, everything.

"The Finnish welfare model makes it possible for you to focus on creating something new," states Naomi Holopainen.

"The Finnish welfare model makes it possible for you to think about various things and to go on to innovate. You can focus on creating something new, instead of using your energy just to survive your daily life," Naomi Holopainen says.

In the past, some critics have called the Nordic welfare model "a nanny state," saying that it quells the killer instinct needed to make it big in business. The reasoning behind this is that once you have the safety net of the society available for you, you stop trying.

However, given the recent successes of Finnish unicorns – in addition to Supercell, names like Rovio, HMD Global, CRF Health, MySQL, Aiven and Oura – one has to wonder: does the societal safety net function also as a sort of trampoline, elevating innovative minds into the world stage?

Be that as it may, one key to Finnish happiness is to be found at the office – which is surprisingly laidback. Supercell is one of the companies lauded for its superior corporate culture, but Ilkka Paananen is quick to counter that "office bliss" is, once again, a national trait. "Finnish work culture is very much about efficiency on a human scale – and very straightforward and functional in its style."

"Office bliss" is a national trait in Finland.

Taru Tujunen, CEO from award-winning marketing agency Ellun Kanat, has cracked at least a part of the code to the Finnish workplace happiness: "Finland is a country with extremely low hierarchies at the workplace which makes everything run much more smoothly. This is, in fact, one of the reasons why Finland is the best place to operate for an innovative company," Tujunen believes.

Innovations can be introduced and implemented quickly in Finland, thanks to low hierarchy at the workplaces.

Naomi Holopainen and Wanda Holopainen are also of the opinion that the Finns have managed, somehow, to cut corporate bureaucracy to a minimum. "Finnish workplaces are quite agile, which means that innovations can be introduced and implemented quickly," Wanda Holopainen believes.

Quotes from the video "Is Happiness Also Good for Business"