Waste sorting and recycling the timely subjects for Chinese journalists 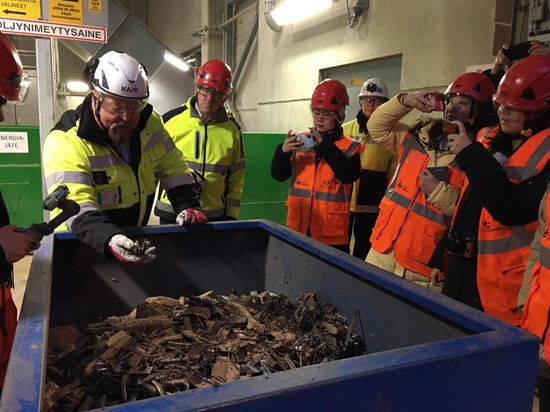 Chinese journalists got to see the process of waste to energy.

Finland has been a leading country in the development of smart cities and sustainable solutions. Many cities in Finland have made concrete plans towards a more sustainable future. To name a few, the capital Helsinki aims at being carbon neutral by 2035, the city of Espoo already five years earlier, while the City of Lahti was just chosen to be Europe’s Green Capital for 2021. Finland is leading the world in designing functional cities that are ecofriendly with smart applications in daily life.

In October 2019 eight journalists from Beijing, Shanghai, Nanjing, Hongkong, Taiwan, Singapore were invited to Finland by Finnfacts/Business Finland and the Ministry of Foreign Affairs on the theme: Smart Cities – sustainable recycling and energy solutions.

During this media tour, journalists got to visit some smart cities districts and meet representatives from cities and government. They also visited a Finnish home to see how daily waste sorting worked before getting to know the end products – smart solutions in relation to recycling and energy production offered by Finnish companies.

Smart cities as a broad topic interested all the invited journalists. This tour program focused mainly on waste recycling and sustainable energy solution, because China began to establish waste recycling system last year, starting from cities such as Shanghai and gradually extending the implementation to other cities.

Some journalists also conducted interviews on topics relevant to their own cities including smart city districts in Finland etc.

After the tour there have been so far 8 articles published in different channels. Below are what journalists took with them from the topics presented during their stay in Finland:

Hong Konger should learn from the Finns

The green economy from Finland

Low carbon journey of the trash in Finland: from waste bins to power station