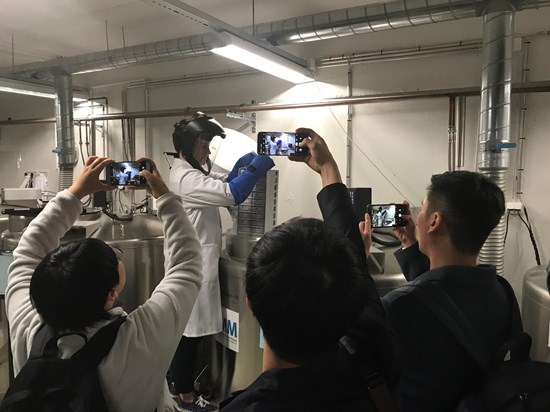 118 international journalists took part in 12 media tours that were organized last year by Business Finland and its partners. The tours generated 336 articles with almost 500 million readers worldwide. Each journalist that participated in the media tours wrote 2,8 articles per tour on average.

Journalists often compare the situation in their home countries to Finland and discuss new options to solve prevailing challenges – could a Finnish solution work in their country? During a health tech media tour, for instance, several Korean journalists compared the challenges of an aging society in Korea and Finland to find more efficient ways for elderly healthcare. The articles presented Finnish experience in utilizing digital solutions in remote healthcare and the unique ecosystem that has made large-scale genetic research possible.

Journalists have commented that Business Finland media tours are well organized, and the places visited are well chosen, helping to give them a broader perspective on the topic.

“The media tour program offered me new approaches to the subject and more ideas to write about than I originally planned”, says Xinge Gao, a Chinese journalist from influential Huanqiu.com publication that took part in the Winter Sports media tour last year.

More and more attention has been given to the careful planning of media tour programs. The programs are planned through extensive discussions with experts within Business Finland including its Global Network, the Ministry for Foreign Affairs of Finland, universities, companies and other partners.

“Each journalist that participated in our media tours wrote 2,8 articles on average per tour, which we consider high. The article amount shows us that we have succeeded in offering our guests interesting topics and resources during our media tours”, says Tsui-Shan Tu, a PR and Media Manager at Business Finland.

Media tours give journalists plenty of interesting information including hands-on concrete experience and possibilities to compare practices between different countries. The aim is also to introduce journalists to Finnish society and culture which has proven to be interesting background information for stories. Moreover, there are not that many international media permanently present in Finland compared to some other European countries, which means that there are hidden stories to tell the world.

Media tours are planned to hightlight important Finnish expertise as well as significant global and local events. Last year there were media tours organized in connection to the Finnish wooden Metsä-Pavilion in Tokyo that highlights Finnish know how and culminates in the Summer Olympics, winter sports tour leading up to the 2022 Beijing Winter Olympics, the HIMMS health technology conference held in Finland for the first time as well as the Slush startup event, to mention a few.

Most media coverage from China in 2019

Journalists from widely followed media from around the world are invited to tours, especially national newspapers and business magazines or channels with wide circulation. Journalists from trade and expert publications are also invited according to the themes of media tours. During 2019 media tours, there were, for example, journalists from The Guardian, Financial Times, The Economist, Handelsblatt from Germany, Chosun Daily from Koreaas well as Yomiuri Shimbun and Elle Decor from Japan.