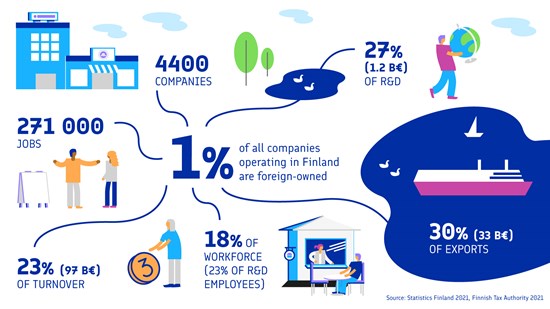 Sometimes life at Invest in Finland is not the “same old, same old” office grind we’re all familiar with. In fact, there was an extra-special case that involved secret meetings at airports, complete with codenames for participants – going in without even knowing the identity of the international company that was thinking about setting up shop in Finland. Care to Google who that might be...

Google was extremely thorough – and a tad secretive – when it started looking for a site for its data center in Europe. Finland was on the short list of the Google executives, but none of the locations presented to the company's fact-finding team really hit home. The search of the search engine company was coming up short.

Invest in Finland had fielded a "welcome wagon" that tried to accommodate the international superstar company in anyway they could think of. After all, all the countries in the world wanted Google to pick them for a base of operations – and here was the golden chance for Finland to get an FDI of the highest order. But finally, it all clicked: the IIF team thought of Summa, the former paper mill located in Hamina, South-East Finland, that could definitely be the ticket.

The rest, as they say, is history. In March 2009, Google announced its plans to convert the 60-year-old Summa paper mill – featuring a machine hall designed by renowned Finnish architect Alvar Aalto – into a modern data center. The site, along with, of course, Google's decision to go north, attracted great global interest as the company went on to complete the first phase of the date center in September 2011.

Today, Google's data center at Summa is one of the most advanced and efficient data centers in its fleet.

Finally, in May 2019, Google announced that it is investing a further EUR 600 million to build a second data center at the Hamina site, bringing the total investment, so far, to EUR 1.4 billion.

But with so many great European candidates in the race, what tipped the scales for Summa and Finland? Well, Google has stated that the Hamina site – located by the Gulf of Finland – was chosen because it had the right combination of energy infrastructure, developable land and available workforce. In addition, the unique opportunity to salvage an old paper mill and to use the pre-existing infrastructure to build a next-level data center was probably a temptation too great to resist.

Thanks to the "good bones" of the mill, Google has been able to create an innovative seawater cooling system to reduce the energy use of the data center. After all, one of the paper mill's original buildings has an unusual feature: a big tunnel that connects it to the sea. This tunnel is now used to bring in cool seawater to a huge intake chamber that feeds directly into the data center's cooling system, from where the water is pumped into a series of heat exchangers to cool the racks of servers before being returned to the Gulf.

According to Google, the novel and technologically advanced cooling system is the first of its kind anywhere in the world. Later on, Google would also invest in wind power farms to juice up its servers.

Today, Google's data center at Summa is one of the most advanced and efficient data centers in its fleet. Furthermore, for Finland, it is the largest foreign greenfield investment of all time.

Another innovative company making a home in Finland is Bayer, the German pharmaceutical giant. Bayer's product portfolio in Finland includes e.g. over-the-counter products, crop protection agents and control substances, but its real "Finnish forte" is prescription drugs. This means, in essence, research and development, production, and export of products manufactured in Finland.

Bayer was celebrated in November, 2021, as the company became the first non-Finnish company to receive the Internationalization Award of the President of the Republic of Finland in a new category, Long-Term International Investor. There's good cause, too: Bayer employs more than 1,000 people in Finland, having expanded its operations several times.

For years now, Bayer has focused much of its R&D in Finland on long-term contraception that uses polymer-based drug delivery technology. Bayer's hormone-releasing intrauterine devices were the first Finnish medicinal product to pass one billion euros in sales, reaching 1.04 billion euros in 2016.

Developed in the City of Turku, the hormone-releasing intrauterine devices have been Finland's most exported pharmaceutical product for more than a decade. Medicines manufactured at the Bayer plant in Turku are sent to more than 130 countries. Furthermore, one of Bayer Group's largest global clinical research units is located in the City of Espoo.

In addition to developing products, Bayer is developing its own operations in Finland, too, and has expanded significantly over the years. Every step of the way, Invest in Finland has offered its own expertise and support to the company.

According to Bayer, Finland has been an important place for Bayer to operate and invest in for a long, long time. The pharmaceutical powerhouse views Finland as a predictable, stable and research-friendly operating environment which makes it an excellent place for an international, innovative company.

Bayer and Finland are a "match made in Heaven" also in the sense that both the company and the country pursue low-carbon, green ways. For Bayer, sustainable action is an integral part of everything the company does. With its innovative solutions, Bayer is contributing significantly to sustainable development all over the world.

What's more, Bayer keeps raising its stakes in Finland: it is building a new pharmaceutical plant in Turku and modernizing its existing production facility. The total value of this investment is 250 million euros. In addition, Bayer invests approximately 80 million euros in Finland each year, including research and development spending.

Sometimes a big company arrives in Finland via a smart corporate acquisition. As John Deer acquired a Finnish company Timberjack in 2000, it wasted little time in concentrating the production of its cut-to-length forest machines to Joensuu, Finland. Since then, the design and manufacture of Deere's cut-to-length forest machines has, therefore, been mostly in the hands of Finns.

Currently, John Deere employs 770 people at John Deere Forestry Oy – and Tampere, Finland, is the European headquarters for the iconic machine-maker. Invest in Finland has served in a key advisory role as the American company has steadily increased its presence in Finland.

Originally, John Deere Forestry chose Finland for its production prowess: know-how of the workers is solid and local engineering products are of extremely high quality. New investments followed over the years: for example, the company built a new assembly hall in its Joensuu factory in 2012 and invested considerably in automation.

John Deere chose Finland for its production prowess: know-how of the workers is solid and local engineering products are of extremely high quality.

The newest investments took place in 2021 and 2022 as the company increased capacity and efficiency to the tune of €15 million. The new machine center and hall expansions will add 4,500 square metres to the Joensuu operation.

Under its concept of "Precision Forestry," John Deere has helped bring sustainable edge into the industry. This means, among other things, that the company is supporting its customers to balance operational demands with environmental concerns. For example, by utilizing TimberMatic™ Maps and Intelligent Boom Control (IBC), a logging operation gets the most from the crop – but also reduces the impact on the environment around it, while doing the job.

For years now, the "secret weapon" for John Deere in Joensuu has been the supplier campus near the factory. The 12,000-square-meter Green Park features a number of local companies that are connected to John Deere's production. John Deere Forestry Ltd. is also the second largest private employer in Joensuu.

The Invest in Finland Bureau, founded in 1992, merged with Finpro, which specializes in export promotion, in 2012. Finpro merged with Tekes into the current Business Finland in 2018. Invest in Finland turned 30 on May 4, 2022. This article is the second part of IIF 30th Anniversary series.